A Man and His Hat

Growing up, I rarely wore a hat. Covering my head messed my hair up too much. If it got really cold, I’d break down and put on a sock hat or pull up the hood on my sweatshirt. You do what you gotta do.

Until he got older, my father never wore a hat either. In sub-zero weather, he’d don a tan, fleece-lined aviator hat — the kind with ear flaps, which he never, ever pulled down. Otherwise, aside from the fire helmet or visored uniform cap he wore on the job, his head stayed uncovered.

Comes a time when every man needs a good hat. Dad’s codger hat (his term) was a Greek fisherman’s cap made of wool — black, I believe, though it may have been a dark navy blue. He wore his codger hat everywhere, pretty much year round. I can’t remember when he got it, but suspect the onset of male pattern baldness played a role.

The purpose of the codger hat is debatable. Beyond any doubt, it is a replacement for hair. The question, however, is why?

An overwhelming majority believe older men wear a codger hat to prevent heat loss — a job previously handled by a once luxurious head of hair. I disagree. Old guys wear hats for the same reason they didn’t wear them when they were young.

While browsing through a mens store about fifteen years ago, I ran across the biggest display of hats I’d ever seen. The gray, Woolrich crushable wool fedora spoke to me. When I tried it on, I knew this was my codger hat. 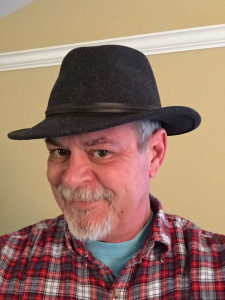 When I wear my codger hat, I look in the rearview mirror and don’t see the receding hairline, thinning hair, or bald spot hiding underneath. Nobody else does either. That’s pretty much the point.

I’ll concede, having worn my hat for all these years, my head gets cold without it. The difference has nothing to do with the enormous bald spot I can’t see without two mirrors, or that I have maybe half as much hair as I did when I found my codger hat. That’s my story, and I’m sticking to it.