Objects in the Rearview Mirror

Objects in the Rearview Mirror 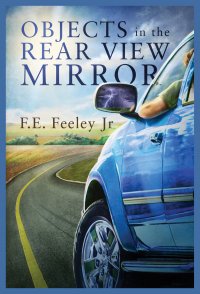 Memoirs of the Human Wraiths

Their new home on Frederick Street in Clay Center, Kansas, was supposed to give writer Jonathan David and his husband, clinical psychologist Dr. Eddie Dorman, an opportunity to enjoy married life. Jonathan has just released his first major bestseller, and he hopes to finally escape his traumatic past and find the quiet existence he has always craved. Eddie has taken a job at the Kansas State University psychology department, and they intend to begin anew.

They have barely settled in when the nightmare begins. Noises, disembodied voices, and mysterious apparitions make Jonathan’s life hell. Part of the house has decided to bare its teeth, show its jagged edges, and bring back the worst of Jonathan’s past. At first, Eddie cannot perceive the spectral events and fears for his husband’s sanity. When he’s also affected by the haunting, he’s unsure of what to do but refuses to be beaten.

Together, they seek a way to fight the forces trying to tear them apart. The world is a frightening place, but confronting their fears plunges Jonathan and Eddie into absolute horror.

Find Objects in the Rearview Mirror:

F.E. Feeley Jr was born and raised in Detroit, Michigan and lived there for twenty years before joining the military. He is a veteran of the US Armed Services; having done a tour in support of Operation Iraq Freedom in 2002-2003, he turned college student, pursuing a degree in political science. He now lives in Southeast Texas where he is engaged to the love of his life, John, and where they raise their 1½ year old German shepherd, Kaiser.

As a young man, reading took center stage in his life, especially those novels about ghosts, witches, goblins, and all the other things that went bump in the night. His favorite authors include such writers as Stephen King, Dean Koontz, and Anne Rice, whose work allowed him to travel to far off places and meet fascinating and scary characters. As a gay man, he wishes to be able to write good fictional literature for those who love the genre and to write characters that readers can relate to. All in all, he is a cigarette smokin’, whiskey drinkin’, rock and roll lovin’, tattoo wearin’ dreamer of a man with a wonderful partner who puts up with his crap and lets him write his stories.