Happy Halloweeen! Thanks a million to writer pals Julie Lynn Hayes and M.A. Church for organizing the 2014 Spooktacular Blog Hop and Giveaway. I’m excited about the opportunity to meet new readers and honored to be associated with so many wonderful writers. 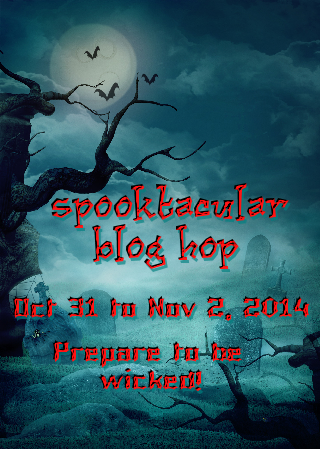 Everyone is doing their own giveaway. CLICK HERE to visit all the participating blogs to enter. You’ve got nothing to lose, and you might even win! I’m giving away an e-copy of one of my three novels (Until Thanksgiving, After Christmas Eve, or Happy Independence Day) to three lucky winners. To enter, leave a comment below.

As a kid, I really got into Halloween. Mom wasn’t terribly creative, so my costumes were always one of those highly flammable store bought pajama-like get-ups. The horrible one-size-fits-all masks made breathing difficult. Seeing through the eye holes was just about impossible.

Given my early experience, Halloween has never been about winning the best costume contest. Nope, for me the focus was on getting as much candy as possible out of my trick or treating experience. The Halloween after a big apartment complex opened nearby was my best take, offset by the trouble I got into for ignoring orders to stay in the neighborhood.

I was thirteen or fourteen the last year I went trick or treating — in drag, no less. At the time, I had no idea I was gay. #SlowLearner  A classmate’s father refused to give me any candy, saying I was too old for trick or treating. At first, I thought he was kidding. But he meant it. He gave everyone in our group candy but me. Wah!

Until I came out in 1979 at the tender age of 21, Halloween had become mostly a nonevent. Being gay changed everything. The annual Halloween party at the local gay bar was a MUST attend event. Folks who cared about such things went all out for their costumes. The rest of us did variations on butch — construction workers, cops, firemen, and for those who had the body for a loin cloth, Tarzan or maybe an Indian chief. #VillagePeople.

The last time I dressed up for Halloween was in the late 1990s. My partner and I made plans to go out in drag (my second Halloween in a dress) with another couple — our best friends, one of whom my partner had been having an affair with for several months — all of which came out that fateful night.  Woo hoo! Party!

For several years, I carved my Jack O’Lantern and stocked up on candy — the good stuff. We only had twenty or so kids in our neighborhood, but hundreds of Trick or Treaters came to my door. A significant percentage were at least fourteen and hadn’t bothered to dress up. Who am I to judge?

After a while, I quit buying candy and pumpkins. Except for a few I yelled at to stay off my lawn, I didn’t know any of the neighborhood kids anyway. So now I sit in my dark house the night Trick or Treaters walk the streets, ignoring rings and knocks from kids who don’t care if the porch light is on or off. I’m sure they call me…

Winners (Alaina, Sula, and Angeles G.) were notified via email on November 4.