The best little dog in the world passed away today. Tico had been limping now and then, favoring his front right paw. It came and went and didn’t seem to bother him much. 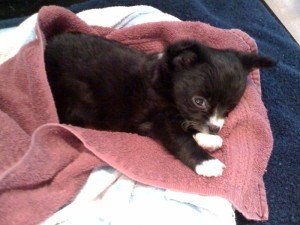 A week ago, he screamed in pain when my ex picked him up. The next day, the ex took Tico into the small animal hospital. It’s something with the discs in his neck. He limped because he was partially paralyzed. They sent him home with medications and instructions to keep Tico in his crate (complete bed rest) except to eat and go out to relieve himself until a followup appointment scheduled ten days later.

At first, the medications seemed to help. When out of his crate, he didn’t limp as much and acted more like his usual, cheerful self. But after a week, he was worse, not better. Unless he was totally gorked out on pain medication, he couldn’t get comfortable. Seeing him suffer was unbearable. 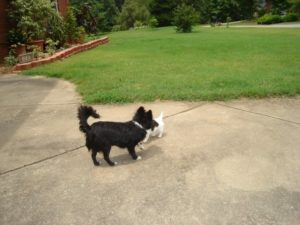 Surgery was astronomically expensive and would have required a costly array of tests to determine if his condition was operable. Even then, given his age, there were no guarantees he’d get better. Either way, our little Tico would never be the same.

The ex and I were a couple when we added Tico to our family. He was “our” dog until I got Toodles almost a year later and Tico became the ex’s dog. We lived together until late 2012, and after the breakup, got together several times a week for play dates. Tico stayed with me when the ex was away, and we all lived together again for most of last year.

The ex and his dog had an enviable relationship. They played together every day (Toodles doesn’t know how to play), went everywhere together (Toodles and I are homebodies), and wherever they went, people raved about how un-chihuahua-like the friendly, outgoing little fellow was (Toodles fits the stereotype). 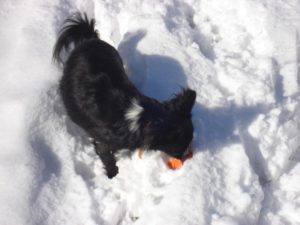 He was a smart little dog too. If Tico couldn’t get outside and needed to poop, he went on the rug closest to the toilet — wherever he happened to be. Not once or twice, but more than 100 times in dozens of different bathrooms.

My relationship with Tico was also special. Toodles is perfectly content beside me until she wants to go out, get a drink of water, or eat. Tico would get bored and toss his toys around the house to entertain himself. When I was writing, he’d wedge himself between me and the keyboard for attention.

He was fiercely protective of his toys — especially his sheep (inside) and balls (outside). If Toodles got anywhere near either one, he’d snarl, snatch it up, and run. Toodles would give chase, but had no interest in his toys. She used to rip his sheep to shreds, so maybe his paranoia was justified. 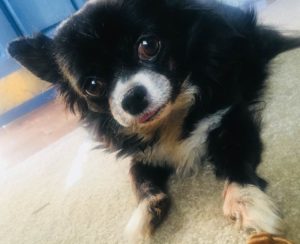 The ex made an appointment to take our baby to the vet for the last time. The four of us spent our last afternoon together at my house. I don’t know when I’ve cried so much. He was heavily medicated, but still alert and able to walk around.

I held him for a long time and cried as I went on and on about what a great dog he’d always been and how sorry I was for not throwing the ball more and for fussing at him about anything. When I stopped petting him, he nuzzled my hand for more, andthen  rolled over so I could rub his belly.

The ex took him outside and threw the ball for him several times. Tico smiled and  wagged his tail, and though he wasn’t able to run, hurried to where the ball landed. I watched from inside and cried some more. 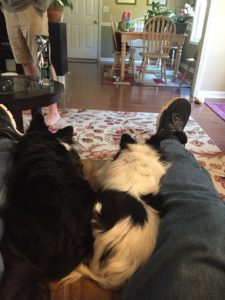 We took him to the vet this afternoon. He assured us we were doing the right thing. Tico wasn’t going to get better. At three o’clock, he breathed his last breath in my ex’s arms, with me hugging them both from behind.

Losing Tico was rough. Watching my ex suffer today and over the past few weeks has been even harder. Our happy little dog had a great life, and will be sorely missed.

My Life, Updates
death of a pet, grief, Tico