My Personal Relationship with Santa

The arrival of the Sears Christmas catalog kicked off the holiday seasons of my childhood. The massive tome offered everything I ever wanted and served as a reference for my annual letter to Santa. When I was old enough, Mom said Santa needed the page number and item number for everything on my list.

Santa kicked off his U.S. tour with the Macy’s Thanksgiving Parade in New York, followed a few days later by the Christmas Parade in Lexington, Kentucky. He rode in his sleigh with eight tiny reindeer atop the biggest fire truck in the city. Dad was on the fire department, so I got to ride on the truck with Santa and toss candy to the crowd.

That’s right. I had a personal relationship with Santa. He called me by name whenever he saw me, and, in the weeks leading up to Christmas, stopped by our house every year — usually more than once. He also read my letter on his television show every year, and at the end of the show, said good bye, not just to me, but to all my cousins as well.

Kids at school said Santa wasn’t real. They just didn’t know him like I did. I whispered in his ear that I really, really wanted something that wasn’t on my list or in my letter. And every time, the secret item could be found under the tree Christmas morning. 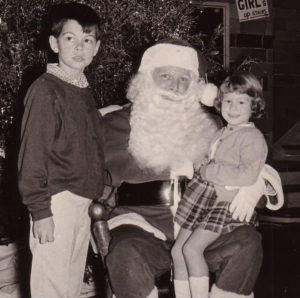 The holiday season wasn’t all about Santa. There was baking to do, presents to buy, gifts to wrap, a tree to decorate, and lights to hang outside. The Ray Conniff and the Ray Coniff Singers and Perry Como Christmas albums will forever hold the “original” versions of every carol on them.

Dad never shopped before Christmas Eve. He could have. The last-minute shopping expedition was part of it for him. He trundled several loads from the trunk of his car down the outside steps to the basement and spent hours wrapping them.

We opened one present on Christmas Eve. Mom and Dad steered us toward the best choice — usually, a new board game to play until bedtime. I was in my early twenties before I actually slept on Christmas Eve. Beginning as early as three in the morning, I’d rouse my sister from a sound sleep to ask Dad if Santa had come yet, sending her back every half hour or so until he said yes.

We emerged from our rooms after Mom and Dad turned on the tree lights, the stereo, and the coffee pot. Santa had clearly spent some time at our house. Gifts were artfully arranged around the tree to appeal to our young eyes. Nobody ever took pictures, but the tableau was truly breathtaking — especially for a child.

The season is chocked-full of precious memories. My grandmother, aunts, uncles, and cousins popped in and out to exchange gifts and play games. Many joined us for dinner, or popped in later for leftovers. What I wouldn’t give to see them again.

Years later, I learned my Uncle Gene was Lexington’s official Santa throughout my childhood. In addition to a thirty-minute television show every afternoon, he visited hospitals, nursing homes, schools, and other places throughout the season. Rather than using a public restroom when nature called, he stopped at our house.