Few things are more adorable than a six-week old chihuahua puppy. Within days of my ex getting a dog I didn’t especially want, I accepted the little darling and took an active role in his upbringing. Early socialization is important, especially with nervous breeds like chihuahuas. Perhaps as a result of all the early attention, Tico is a smart, fun-loving, and courageous little dog who has never met a stranger. 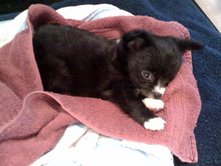 Tico is also unmistakably the ex’s dog. Despite my early crotchetiness, his preference for the ex sometimes hurt my feelings a tiny little bit. Yeah — the dog hurt my feelings. I’ll own it.

Enter Toodles. As with Tico, we took her everywhere. Fearing she too would prefer my amiable ex over her crotchety daddy, I was careful not to let him do too much with her. He had Tico. Toodles was mine. Yeah. I’m owning that too. When we split up, he took Tico and I kept Toodles. They still get together once or twice a week for play dates, with overnight visits whenever one of us needs to be out of town. 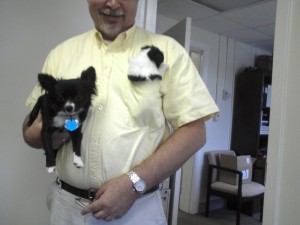 If she were a puppy again, the only change I’d make would be to leave Tico at home more when we socialized her. When Toodles encounters someone she doesn’t know, she follows Tico’s lead. When he’s not around, she’s a lot more fearful. I can count on one hand the people she’ll allow close enough to pet her — and all but one she’s known since she was a puppy. 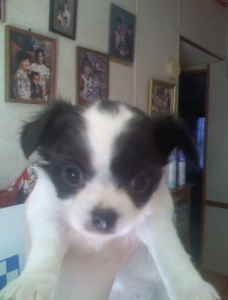 We go for twenty-minute walks every morning and evening. Inclement weather may shorten the walk a bit, but we always go. There are lots of dog walkers in our neighborhood. Most of the other dogs engage in a sniff-fest when they meet each other. Not Toodles. She screams in terror if another dog comes anywhere near her. No doubt, the neighbors think I’m snobby. I cross the street or take other evasive measures to avoid these encounters.

Is she spoiled? Maybe a teeny bit, but she’s earned special treatment. She’s never had an accident in my house, and to my knowledge, has only pooped in my yard once in the two years I’ve lived here. She’s not a yapper, and unlike Tico, never pesters anyone to play with her. Wandering off isn’t her thing, either. Wherever I am is where she wants to be.

She does have one bad habit. Around 5 p.m. and 7 p.m. (6 p.m. and 8 p.m. Daylight Savings Time), she gets all up in my face demanding chew time. Her accuracy is uncanny — she’s never off by more than ten minutes. She raises holy hell, yapping and stomping her paws until she gets her way. Cutest damn thing you’ve ever seen.

First chew time is her appetizer course. I give her a consumable treat — to keep her teeth clean and fight bad breath. Then she’ll eat her food. Dessert, served promptly at seven o’clock (8:00 DST) or there’s hell to pay, consists of a rawhide stick with desiccated chicken inside. She’ll masticate on dessert for an hour or more and frequently picks up where she left off first thing the next morning. 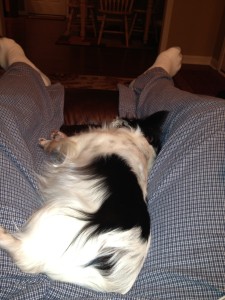 When I’m at home and awake, I’m usually in my recliner with Toodles stretched out asleep somewhere between my thighs (if she’s cold) and my feet (if she’s not). When I say time to go night-night or for a nap, she gets all excited — like she hasn’t slept for days, dashing back to the bedroom where she waits for me to pick her up to put her on the bed.

What comes next is her most endearing habit of all. After I lay down and curl up on my side, she lays down with her paws and snout on my bicep, shoved up as close as she can get to my chest for cuddle time. If I don’t rub her chest, she paws my arm, and if I stop before she’s had enough, she licks my face.

Yeah, we have a very special relationship. Who trained who is open to debate, but the results speak for themselves. We’re perfect for each other. I’m happy. She’s happy. What more could you want?